The Government enjoyed a 12% gain in revenue contribution from the Ceylon Tobacco Company Plc (CTC) to record Rs. 49 billion during the first half but analysts warned that the steady income stream would be at stake if the State went ahead with its overambitious move to up taxation of cigarettes to 90% of stick price.

As per interim results released last week, CTC’s contribution to State revenue in the form of Excise Tax, Corporate Tax and other levies rose by 12% to Rs. 49 billion.

The increase according to CTC was “driven primarily by higher prices as a result of the Excise-led price increase experienced in October 2015 and relatively stable volumes during the first six months of 2016.” 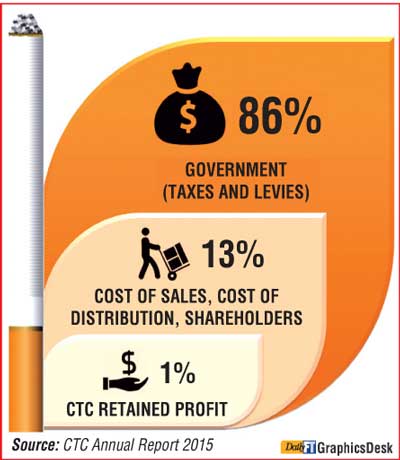 As opposed to over 80% taxation, the Government, as part of its anti-smoking drive, has announced moves to increase it to 90%.

Currently taxation on cigarettes in Sri Lanka is the third highest in Asia whilst CTC’s value addition is near 90%. In 2015, CTC’s Value Added to the State via excises and taxes was a staggering Rs. 91.6 billion, up by 24% from the previous year. The 2015 value amounted to 7% of the State’s total tax revenue and 88% of the value generated by CTC.

In a statement accompanying interim results, CTC said law enforcement agencies continued to effectively curtail the spread of unauthorised and illicit tobacco products. A total of 811 raids uncovered 2.5 million illegal cigarettes at a market value of Rs. 88 million during the first six months of 2016. However, under-regulated and low-taxed products such as ‘Beedi’ still remained a key threat to Government revenue from the tobacco industry.

The company said it remained committed to investing in its premium brands such as Dunhill and Benson & Hedges with a predominant focus on infusing value into the mainstream brand John Player Gold Leaf.

The company also said its flagship CSR initiative, the Sustainable Agricultural Development Program (SADP), continued to focus on alleviating poverty and empowering the livelihoods of families in rural Sri Lanka. The total number of families supported by the company as at June 2016 stood at 18,464, comprising 71,285 beneficiaries in 16 districts.

More in this category: « US Asst. Secretary Rivkin to arrive in SL Foreign inflow to capital market gathers pace »
back to top
› ‹
› ‹